How to Teach Numbers 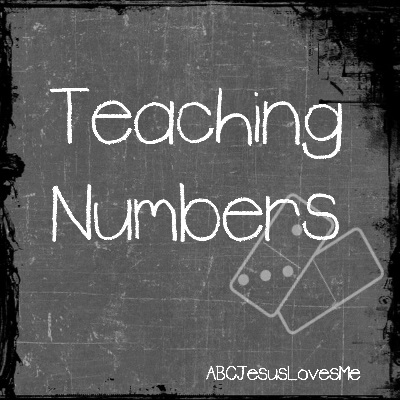 Due to the lack of fine motor skills, the 2 and 3 Year Old Curriculum do not include plans for a child to write their numbers on handwriting worksheets.   One tactile way to learn the correct formation of the numbers is to use tactile flashcards.  Although they can be purchased, these can be made at home with a little bit of time.  In the 4 Year Old Curriculum, tracing handwriting worksheets are introduced.  The 5 Year Curriculum takes handwriting to the next level in writing words and numbers.To aid in learning the correct way to write numbers, Number Rhymes are included in the curriculum.

I also highly suggest the My First Steps to Math

• When doing activities with numbers and letters - do only a few at a time.  Doing all 26 letters or 21 numbers requires too much attention span.
• Write the letter/number on an erase board, have the child trace and erase it off
• 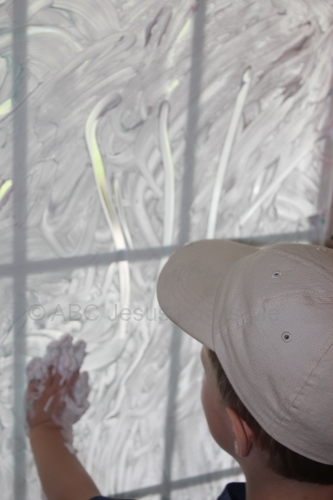 or shaving cream - over a written letter or number.  Read more ...

• SWAT!
Place a few different items on table (sight words, letters, numbers, colors, shapes, whatever you're working on) then give the kids a *clean* fly swatter , call out an item and they get to hit it! I tried playing with both my boys together but it was better doing it individually at their age. Keep those over zealous swatters in line with rules like "swatters UP!" when they found their target and then only let them hit it one time and hold it there for a second.  Idea from Jen.

• Draw a letter or number on the child’s back or have the child draw it on your back (this is a more advanced activity)
• Using play dough or cookie dough, make letter or number cut outs with ABC/123 cookie cutters - A-B-C and 1-2-3 Cutter Set

• When the weather is warm use Sidewalk Chalk

to write big letters or numbers on the pavement.  Walk the letters or numbers in the correct formation.
• Play alphabet or number Memory.  Write each letter on an index card twice.  Cut the index cards in half for perfect Memory cards.
• Tactile Letters & Numbers - trace correctly
• Using flashcards laid on a table, have the child point to various letters or numbers called out - Brainy Baby ABC Flashcards

for something different
• Form letters and numbers with fingers, food by biting off certain parts, body by holding your arms or feet in different ways, pipe cleaners, etc.
• Computer Time - Increase the font to a large size and allow the child to type different letter or numbers
• Juice lids or milk caps with letters or numbers written on them make great game pieces
• On a sheet of dark blue construction paper, have the child arrange a length of heavy gift cord or string to resemble a letter.
Then, place it in a sunny indoor spot for several hours. Late in the day, lift the string to reveal a sun-print letter. (Idea from Preschool Education )
• In a dark room, use a flashlight to write the letter or number on the ceiling.  For another twist, post a large letter or number on the wall or ceiling and trace it with a flashlight. (Idea from Preschool Education)

• Floor Numbers - Lay out numbers and place correct the number of tokens, poker chips, or coins under the numbers to match
• Write numbers on cups so that the cups sit upside down.  Place a coin/button under one of the cups.  Have the child guess which cup the coin/button is under by saying the number.
• Roll a dice and count the number
• Count stairs as you go up or down.
• In an elevator, have your child find the number of the floor to push.  Say the numbers as the elevator moves between floors.
• Using shallow cups, write a number on the side of each cup.  Have your child fill each cup with the correct number of items - use items like cheerios, M&M’s, buttons, coins, etc.
• Ask your child to dial telephone numbers for you.
• Look at house numbers.
• While cooking, have the child get you different quantities of items (i.e. 3 sticks of butter, 2 onions, 5 crackers)
• Using flashcards, playing cards, or UNO Cards

laid on a table, have your child point to various numbers called.  Place objects under the appropriate numbers (toy cars, beans, noodles, etc.)
• Print one number on one clothes pin. Continue to create numbers 0-25 on individual clothes pins.  Have the child clip the numbers onto a string or cardboard piece in order. (Idea from Wow! I'm Reading!)
• Put magnetic refrigerator letters or numbers into a small bag or basket.  Have the child draw a number and tell you the number.  For fine motor skill practice, have the child show you that number on their fingers.
• Calendar Activity - On Starfall.com, this activity lets the child design a monthly calendar as well as explain what the day is.  Excellent!!!  A great start to a school day and reinforce numbers.
• Number Font Sort - Numbers 1-9

- Number Game - Choose the circle with the correct number of objects.
- Starfall.com is awesome!
- PBSkids.org has some alaphbet games.