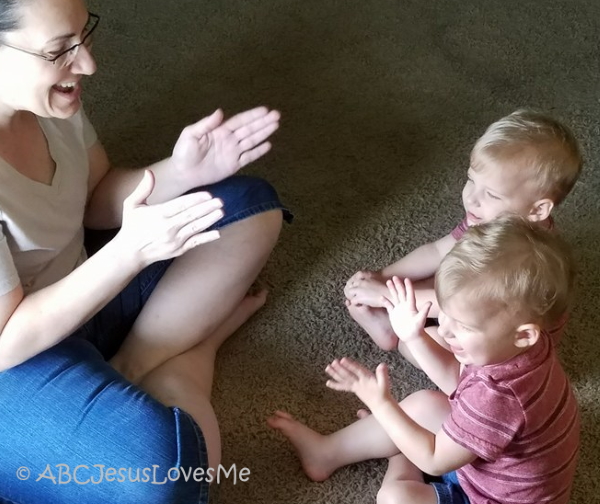 Traditional poems and Nursery Rhymes with actions help children with rhyme, fine motor skills, phonemic awareness, rhythm, and are important for pre-reading skills.  Weekly Lesson Plans of the ABCJesusLovesMe 2-5 Year Curricula include a Nursery Rhyme or fingerplay to work on the beginning and ending sounds of words.  Because this awareness is critical for reading and spelling, it is important to use the suggested rhymes included in this curriculum.

Assist the child in performing actions to the poems and quote them very slowly at first to help the child correctly learn the words.  Quote the poem throughout the day (e.g. while driving, in the bathtub, while washing hands).  Simple motions (or actions) are included with some poems to involve the children in the rhyme and further the learning.

Below is a compiled list of rhymes used in the curriculum.

One, two, three, four five! (count with your fingers)
Once I caught a fish alive; (place palms together to make a swimming fish)
Six, seven, eight, nine, ten.  (count with your fingers)
Then I let it go again.  (throw hands in the air)
Why did you let it go?  (shrug shoulders)
Because it bit my finger so.  (one hand bite pinkie finger on right hand)
Which finger did it bite?  (shrug shoulders)
This little finger on my right.  (wiggle pinkie finger on right hand)

Baa, baa, black sheep, (hammer fists together)
Have you any wool? (shrug shoulders)
Yes sir, yes sir, (shake head)
Three bags full. (raise three fingers)
One for the master, (one hand out)
One for the dame, (other hand out)
And one for the little boy (hands show little)
Who lives down the lane. (sway hands to create a lane)

Five fat peas in a pea pod pressed (hold hand in a fist)
One grew, two grew, so did all the rest (put thumb and fingers up one by one)
They grew and grew (raise hands in the air very slowly)
And did not stop, Until one day
The pod went POP! (clap)

Hey diddle diddle, the cat and the fiddle,
The cow jumped over the moon,
The little dog laughed to see such sport,
And the dish ran away with the spoon.

It’s raining, it’s pouring
The old man is snoring
He went to bed and bumped his head
And he couldn’t get up in the morning

Little Bo-Peep has lost her sheep,
And doesn't know where to find them;
Leave them alone, And they'll come home,
Wagging their tails behind them.

Mary Had a Little Lamb

Mary, Mary quite contrary
How does your garden grow
With silver bells and cockle shells
And pretty maids all in a row

One, two, buckle my shoe
Three, four, shut the door
Five, six, pick up sticks
Seven, eight, lay them straight
Nine, ten, it's time to end
Next time, let’s do it again

ABCJLM Movements and Ideas:
• Make actions simple
• Make activities interesting - sing or talk in big and little voice, faster and slower, softer and louder, add instruments
• Stop songs in the middle to repeat a hard line or action, talk about the meaning, or for whatever reason necessary to help the child learn it
• Take the nursery rhymes, finger plays, and songs very slowly at first and wait for the child to do the action before moving on
• Stop on rhyming words and have the child fill in word
• Count the number of times a word is in a song, rhyme, or finger play
• Sing throughout the day - just because the child is not singing out loud with you does not mean they are not singing in their head
• Make sure the child uses his or her pretty voice to sing - yelling is not singing
• Sometimes sing the songs or say the rhymes using different voices - high, low, big, small, etc.

All nursery rhymes are "Traditional" unless otherwise noted.